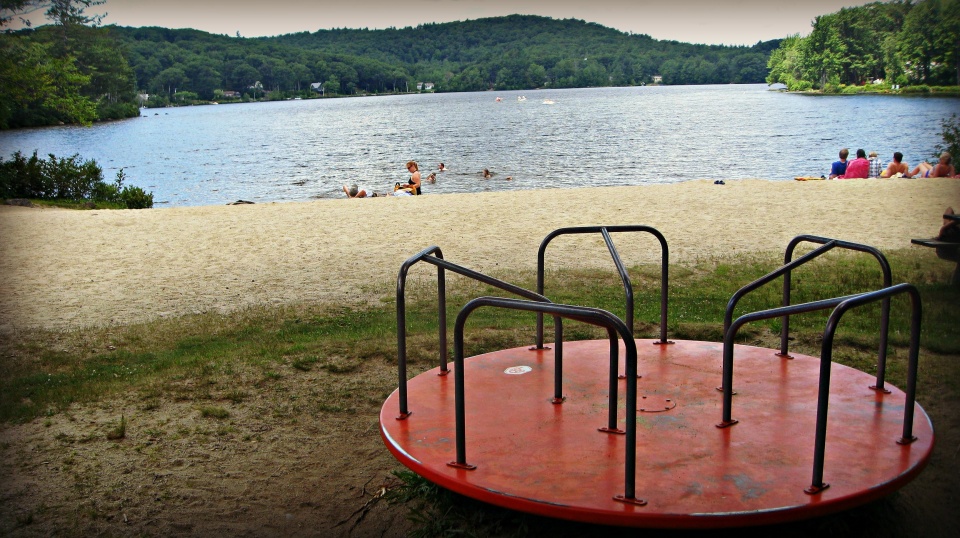 HARRISVILLE, NH – I was thrilled to discover that Harrisville Pond beach playground had an old school whirli-gig! Some of you of a certain age may remember one of the greatest of dangerous playground rides. It also went by the name merry-go-round or a fun-go-round. It Buffalo, it was called a whirli-gig.

The whirli-gig is a circular spinning platform (metal of course) that stands on a rotating ball bearing base about a half-foot off the ground. It has crude hand railings (more metal) that the child can grasp in a vain attempt to remain on the ride while someone (usually an adult) whips the ride around in a circle fast enough to fling the children off.

The thus flung children would likely then either burn their legs and hands on the serrated, steel floor of the device, or bash their heads into the hand railings, or if they were lucky, would fly entirely off the whirli-gig onto the hard cement.

Those children that did manage to defy gravity itself and stay on the ride would be so dizzy when they got off that they would just walk straight into trees or fall down like little drunks.

This was, by far, the finest ride in the old playground.

Today’s version of the whirli-gig is a dreary unedged plastic abomination, with textured handles to prevent slippage.  The bearings are no longer free running, so even several adults together cannot get the thing up to the G-force speed of the old ride.

A ride like the whirli-gig in Harrisville should be as much a part of a kid’s coming of age as the first bike crash, falling out of a tree the first time or the time-honored tradition of that first stitch on your knee.

So kudos to you, Harrisville for understanding that skinned knees are just fine! I will take the twins to Harrisville. We will ride the whirli-gig. I will know where the nearest emergency room is. And life will be good.