Mount Washington and the Early Beginnings of Instagram Tourism

Imagine browsing an art gallery in Boston in 1870, when you turn a corner and come upon a monumental canvas, ten feet wide, bordered by an enormous, bold frame. And yet, for all its grandeur, the painting called “The Emerald Pool,” of a place in the White Mountains just north of you, is intimate and concealed. Despite the towering bulk of the imposing mountain behind the water fall depicted in the painting, the pool itself is gentle. Deer seem to walk unafraid right out of the woods. Albert Bierstadt’s painting of a place that in your head seemed distant and dangerous, now suddenly becomes possible. Maybe you can get out of the claustrophobic city, make it up there, take a train or a coach. Maybe you can even get to stand right there, next to that pool. Maybe.

So you tell some friends and bring them to see the painting for themselves. And there are others. The painting is exhibited in New York, Philadelphia and Chicago. It even wins a medal in Vienna.

Like the viral capture of a favorite Instagram picture or Facebook meme in our digital world, or like the easy share of Pinterest, 19th Century artists like Bierstadt were at the vanguard of and eager participants in capturing the wild and unwieldy (and often deadly) wilderness of the White Mountains in sketches and painting and offering their visions up to eager adventurers around the world. These early artists captured the imagination of a country looking to explore and expand – and soon, the tourists began to come.

Bierstadt’s spectacular painting, along with hundreds of early books, drawings and even photography of Mount Washington and the surrounding area is currently on exhibit at the Currier Museum of Art in Manchester, N.H. The exhibition, titled “Mount Washington, The Crown of New England” is an exhaustive and detailed history of the visual culture that fired the imaginations of tourists from around the world to visit New Hampshire. The exhibition runs through Jan. 16, 2017.

And much like our often far-from-transparent digital footprints, what’s so extraordinary about much of the work in display, is how beautifully unrealistic the images actually are. In Bierstadt’s famous painting for example, Mount Washington bolts up from the earth in the background of the pool, giving the scene an epic atmosphere. In reality, no mountain can actually be seen from the real Emerald Pool. In one of the earliest illustrations of Mount Washington, Abel Bowen’s 1823 “Comparative View of the Heights of Mountains in & c in N. Hampshire,” the peaks sore to massive points, like impossible triangles. 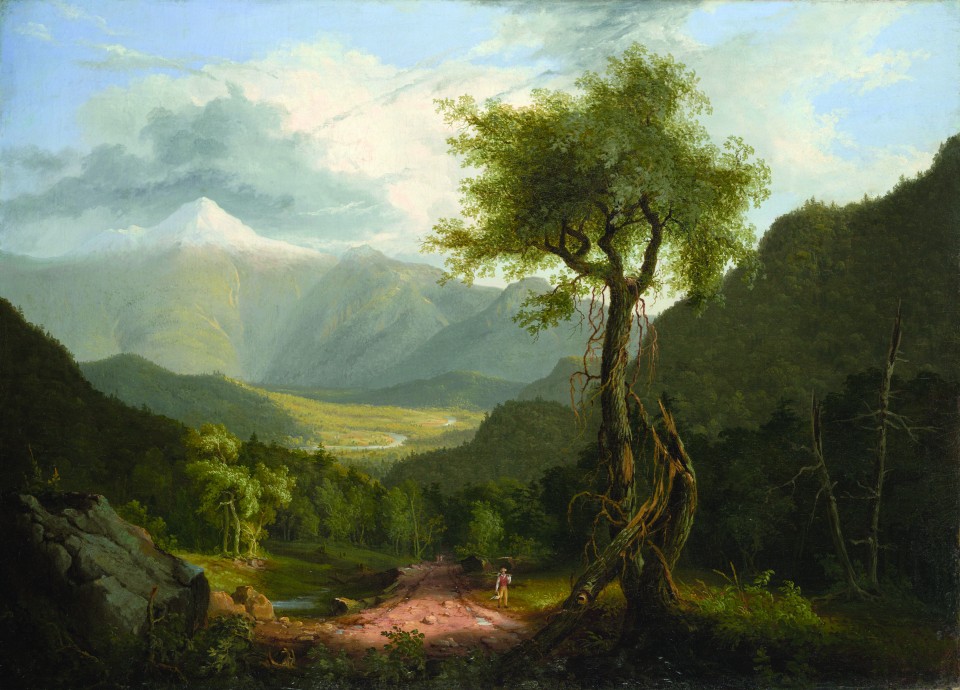 The central core of the exhibition is the English-born painter from New York, Thomas Cole, one of the first non-regional artists to begin producing images of Mount Washington. His iconic 1827 painting, “View in the White Mountains” was the first truly “viral” painting, the image that announced both the spectacular geography of northern New Hampshire and also ushered in a new American style of landscape painting that began to develop a sense of pride and nationalism for the new country. It wasn’t enough that Mount Washington existed, but rather in his bold representation of the rugged mountain, towering and white, looming over the simple, delicate countryside with tiny farmers in the foreground, Cole announced that the mountain was ours as well.

The Currier’s exhibit drives home this notion of national pride again and again as the visitor is witness to the eventual explorations of the summit, to trails and summit buildings, to the auto road and the Cog Railroad. One of my favorite painting in the exhibit is Edward Hill’s 1884 “Cog Railroad” which shows two steaming locomotives near Jacob’s Ladder, the steepest part of the rails, ascending at a nearly impossible angle – smoke belching, mist pouring over the ridge, and a sharp, menacing landscape of rocks to navigate. 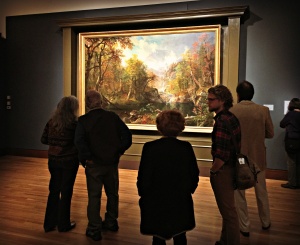 The exhibition, as vast as it is, offers just a taste of the massive amount of art, writing and photography that was produced during the early years of the mountain’s exploration, but paints a clear picture of how Mount Washington came to represent the hopes and ambitions of a young country looking for identity. And much like our own search for connection and self in today’s world of digital identity, it’s easy to see why curiosity about the mountain spread just as quickly as well.

Dan Szczesny is an author and journalist living in New Hampshire, and is the Associate Publisher of Hippo Press. He’s written several travel memoirs including on the White Mountains, Nepal and Alaska. He’s currently working on “The White Mountain,” a compendium of the cultural and social history of Mount Washington. For more information on the book and to learn how you can sponsor the project or contribute, watch the video and read about the book here: The White Mountain Book